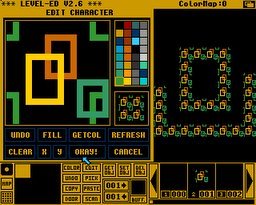 Talking about essential tools for game development I have to mention LevelEd. This one was used to create the Levels for Traps'n'Treasures on the Amiga. It allowed to create big level maps with only 255 32x32 Pixel character blocks. I always try to find the time to develop my own tools so I can expand the functionality along development.
Posted by King Roman at 4:55 PM 5 comments:

My Amiga Music Legacy on AMP!

I'm very happy to announce that my original SoundFX Songs from 1987-1992 finally made it to the AMIGA Music Preservation Site.

With the link below you can directly access my profile and download the songs I composed:
http://amp.dascene.net/detail.php?detail=modules&view=6317

Note: You need the Deliplayer if you want to play them on a PC.
Posted by King Roman at 10:36 PM 1 comment:

Ahoi There!
If you believe it or not but the evil pirate Redbeard - that was playing the counterpart of Jeremy Flinn - actually existed. Here, and for the first time ever, the fans of Traps'n'Treasures can finally see who they had to fight against in these hours and hours of tough gameplay.

There were actually plans that we put end-bosses in TNT but there were other priorities that were more important (e.g. "Why is this damn memory management losing the released bytes!!!" ). Another reason why we decided against end-bosses was that in a Jump'n'Run end-bosses were always associated with "Jump with own bottom on enemie's head". We did not want to go the same way.
Posted by King Roman at 10:51 PM 3 comments:

King Roman
Yes - I'm a computer enthusiast. I used to be one of those kids that knew from the very first encounter (with a Commodore VC-20) what their lifelong hobby declaration will be: Computers - The fascination to create new worlds only limited by the amount of knowledge you put inside them.